One of the most important parts of research is making mistakes. This can be terrifying because from the time that we’re young we’re taught that mistakes are a bad thing, so when I messed up almost every part of my first solo reaction, I thought I was done for. I figured that if my mentor didn’t kick me out of lab for the day he would yell at me or be incredibly angry. But none of that happened and I learned a lot. So I’m going to tell my story of my colossal mess up because it’s pretty funny and to show other perfectionists like me that mistakes are okay.

The day started off normal, my mentor was helping me finish working up a reaction that I had set up the previous day and then I started helping him work on his reaction. He asked me to use a machine called a rotovap to evaporate the solvent so that he could see if he made the right thing. I grabbed a flask and started doing what he asked but when he came back in and told me that I grabbed a flask that was wet with water (his reaction was water sensitive). He wasn’t so happy with me after that but he scolded me and got over it. Later, after we finished with everything, he told me that he was going to the office to work on his stuff and he wanted me to work up another reaction that I had done on my own. This was the beginning of a long night.
The first thing I had to do was a simple filtration just so that I could filter away anything I didn’t want (keep in mind this was something I had been doing for months). I grabbed the wrong size funnel and ended up clogging it so what should have been a 2-minute filtration took around an hour. He came in and told me this and essentially said “oh well, start on the next part.” The next part of my work up was washing my solution with salt water and a certain solvent, pretty easy. Well it should have been. I used way too much salt water so it ended up taking me multiple hours and about 6 different Erlenmeyer flasks for one simple wash. But I finally did it and then I had to evaporate the solvent just like I did earlier in the day. I ended up spilling the solvent all over the machine and my mentor had to come in, take it apart, and thoroughly clean it for me.
By the time I was done it was almost 11:30 at night (I started at 6). I jokingly told my mentor that he should find another student and he looked at me, laughed, and said “you’re full of it if you think you’re the only undergrad to ever mess up. This is minor.”
We both left the lab laughing about the day. 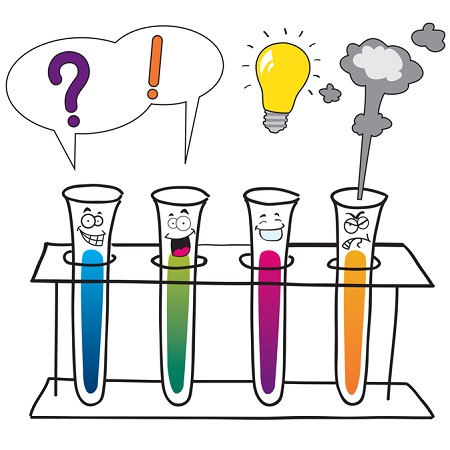 Rachel is going into her second year as a chemistry major. She enjoys nature and all things chemistry. She will be working in professor Menard's lab for the
summer.