Wait a minute… Don’t Lasers Heat Things Up? A Laser Cooling Primer for the Uninitiated 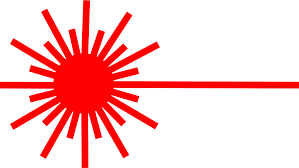 Classical mechanics is the study of macroscopic objects and how they react to forces, and it works well. Really well. But when it comes to small particles, the same rules don’t apply. Quantum mechanics is the underlying theory that all particles can behave like waves, and vice versa.

We can’t see quantum effects in our day to day lives because things are too hot and heavy. Even though all particles behave likes waves, the amalgamation of the sheer number of them that it takes to make anything macroscopic cancels out any ambiguity. To see the effects of quantum theory in the lab, we have to cool lithium atoms down to just microKelvin away from absolute zero and pack them all together, where they will begin to show quantum interactions.

Unfortunately, I can’t buy ultra-cold lithium at Costco (you need a gold membership), so how do we make it ourselves? Cue the lasers. Laser cooling takes advantage of the interaction between atoms and light to slow them down. Since temperature is a measure of average kinetic energy, they are now ‘colder’.

“I hate to break it to you Max, but you’ve really lost it this time. We’re talking about lasers here. LASERS. Lasers heat things up. I saw this video of a laser blowing up a balloon.”

Ok fine. You got me. I saw that video too and it’s cool. Lasers usually heat things up. They are good at doing this because of how tightly packed the energy in a laser beam is. To put it in perspective, the average person probably puts out about 250 Watts while running. A horsepower is almost 800 Watts, and engines can put out many hundreds of horsepower. So, it may be a bit of a shock that even a 0.2 Watt laser beam is actually pretty powerful, sometimes even enough to permanently blind you. Yikes. Even with less than 1/1000th of the power that you can put out just by running, a laser can do some serious damage.

This is partially due to the fact that laser light is coherent, effectively meaning it is all the same color. However, this combination of homogeneity and power ‘density’ actually also makes it perfect to cool atoms down. But how do you do it?

The answer is very clever: using the doppler shift. Most people have experienced an ambulance siren dramatically changing pitch as soon as it passes you. This is because the motion of the car changes the spacing of the sound waves travelling towards you, and so they hit your ear more or less frequently if the car is moving towards or away from you, respectively. We interpret this increased or decreased frequency as a change in pitch. Atoms ‘see’ light in exactly the same way. Light also has wavelike properties, and the motion of the atom will change the perceived frequency of the light depending on its velocity (see picture). 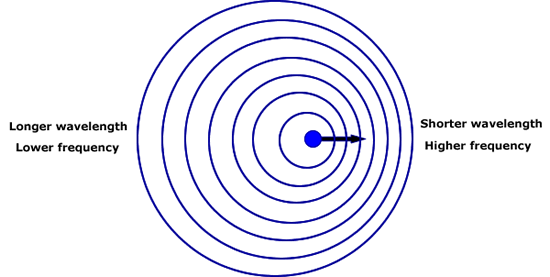 Another important piece of the puzzle that we need to use is the fact that a given atom can absorb or emit light only at specific frequencies. This is another quantum phenomenon, and although it is strange, it is true. A frequency of light corresponds to a color, so think of these specific frequencies as a specific color of light. For lithium, it is 671 nm, which is a deep red.

We’ve got the ingredients. How do we get the cool? Well, throw out your Ray-Bans. Imagine sending out light that has a frequency that is a little less than the one we need for the transition. If we send this beam into a cloud of gaseous atoms, then only the atoms that are moving towards the beam will see an increase in frequency, and therefore the right color light for the transition. The other atoms will see frequencies that are too low.

Even though photons do not have any mass, they do have momentum. When the atom moving towards the photon absorbs it, it gets a kick back in the opposite direction, and it is now slower! Over many cycles, we kick more and more of the atoms until they are cool enough to confine.

Although this is only the first step of many to get temperatures that are low enough to explore quantum interactions, it is amazing that massless light can cool atoms with real mass. Under the right conditions, lasers aren’t just a way to pop balloons and remove tattoos that you thought you wouldn’t regret.