Experiment, try something new: but most importantly learn when to move on 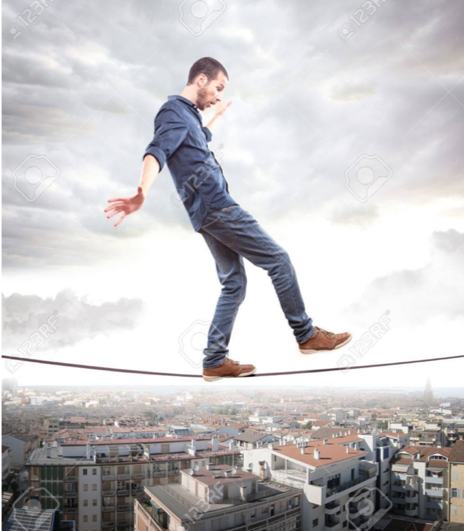 The wide variety of majors available at UC Santa Barbara gives every student a chance to study whatever it is they are most interested in. This study can be applied by performing research and other activities that enhance the learning process. It is important, however, that students are able to balance experimenting and learning when to move on.

Being a second year Computer Engineering student, I knew that my interests for a variety of fields were in development. When I talked to my digital design professor about his research, I found out that he does research on improved drug delivery systems. In other words, his team was trying to target cancer cells and attack them directly instead of destroying other healthy cells in the process of treating the bad ones. This, to me, seemed like an incredible opportunity. A chance to apply my Electrical Engineering and Computer Science background to something more than computers. But I also learned the variety of research that goes in under his lab, and this really motivated me to be involved as I saw myself being able to explore different opportunities.

So, when I first started my Gorman Scholar internship, I started by researching how proteins interact with osmolytes under different conditions. I first learned how to use programs such as VMD, which is used to build the protein structure, and NAMD which performs the simulations. After working on these programs and reading research papers I found myself not being very productive. Knowing myself, I knew this was because my interest in the subject has dulled. After spending two weeks, I decided that it was more beneficial and more appropriate for my future to work on different project. That is when I first learned about the Two-Photon Microscopy that my lab works to build in collaboration with other departments.

This device will be unique in such that they want to enhance it with a wireless technology that is able to conduct real life experiments. And my part will be to help write a code that is able to process and reconstruct an image from the data flowing from the device. So, for the past week I have been experimenting with CUDA programming. This is an NVidia technology that uses the computer’s graphics card instead of the CPU to execute the code. It has been really interesting and an interactive process, and I hope to accomplish something by the end of these next 5 weeks.

I had kept thinking that I wasted time, and that I didn’t learn anything. But I was wrong. By spending time doing something I didn’t like I was able to learn something about myself. I was also able to make a constructive decision at a critical time which I felt took a lot out of me to do. Either way, my advice for anyone reading this post, pretty much the only thing I recommend you take out of this is to Experiment, try something new, but know when to move on and that will come with practice.

Picking Outside the Box

Computer science, computer science and more computer science. This was how my first year as a computer engineering major here at UCSB felt like. It was the only subject I took every quarter that dealt with my major. Although the courses were fun and challenging, I was hoping to have a course that dealt with circuits. Therefore, when I was searching for a professor to do research with during the summer of 2016,Professor James Buckwalter’s page caught my eye. He was working with millimeter-wave integrated circuits that would help increase data rates. It might not sound to exciting, but to me, helping increase the speed at which devices receive and transmit data sounded awesome. Additionally, integrated circuits sounded complex and I love a challenge.

After emailing Dr. Buckwalter, and setting up a time to meet up, I had a question bothering me. How was I supposed to help with integrated circuits if I had no previous knowledge of circuits in general? Having the question in the back of my head, I met with Dr. Buckwalter introduced myself and spoke to him about my interest in his research. Dr. Buckwalter then asked me what year I was in and what courses I had taken. After answering his questions, he said what I was most afraid he would say. Politely, explained to me that I had no experience in circuits and therefore it would be hard for me to help them in their research. However, he proposed another project, in which I would scan the radio spectrum to search for underutilized frequencies. After giving me further explanation, I was worried I was not going to like the project, but at the same time I had come in asking to work on something I had no knowledge of. Unconsciously, my mouth opened and agreed to the offer. I was worried, I had little information of what to expect, what I was going to learn, and what exactly I would be doing.

Fast forward into today, I am glad to have accepted Dr. Buckwalter’s offer because radio frequencies and the radio spectrum are much cooler than I expected. Each frequency is unique and therefore travels in its own “lane” carrying information. Determining which lanes are open is my goal for this summer. By doing this, we can then use the lanes that are left unused and make the spectrum more efficient, allowing data rates to increase. As you can see, I am actually doing something similar to what I initially wanted to do, except I am doing it through the radio spectrum.

During the three weeks I have been in the lab, I have learned more information than I expected in areas I did not expect. For example, I learned the two different ways in which phones transmit and receive signals, the path the waves follow when they are received by an antenna, and how the frequencies are extracted from the waves entering the antenna. I find the extraction of frequencies to be the most interesting.

It turns out that there is an equation called the Fourier Series that tells us that any function of time can be estimated by a series of sine and cosine waves with different frequencies. For instance, the square wave below is really just a combination of infinite amount of sine waves. 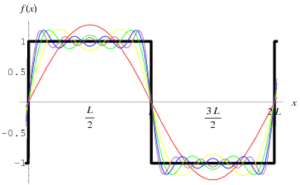 Having this in mind, when scanning a specific range of the radio spectrum, many different waves with different frequencies are added together along with noise. Now noise are random numbers with a certain variance added or subtracted to the signal. Therefore, once the signal is plotted onto a graph, it looks like Figure 2 and it is practically impossible to tell what frequencies are present in the range scanned. 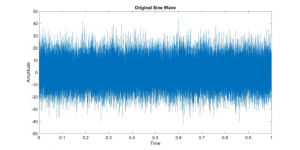 However, when the Fast Fourier Series (FFT), a fast way to calculate the Fourier Series, is implemented to the function, we can visually see what frequencies are in the function by seeing the big spikes in the FFT graph (Figure 3). In the case below only frequency 10(Hz) is present and therefore is showed by two spikes in at 10(Hz) and -10(Hz). 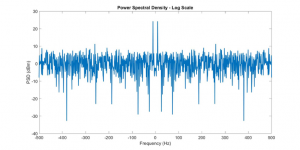 Anyhow, what I am trying to say is that when choosing a research project, be open about it. It doesn’t have to be on something you are an expert on. It doesn’t even have to be related to your major. In my case, it was within my major, but it was new to me. Now, it is not so new and I spend hours working on my project, sometimes skipping meals because I am lost in the world of radio frequencies. Hence, I encourage all to pick a project outside the box, you never know what you will learn about the topic and about yourself.