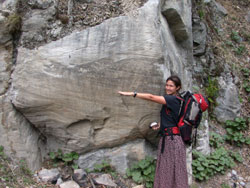 The world’s highest mountain range—the Himalayas—was Michelle Garde’s natural laboratory for two months. Supported by a National Science Foundation “Research Experiences for Undergraduates” grant, the UCSB senior thrived at 25,000 feet. First, she served as field assistant to Beth Pratt, a graduate student who was working on the history of glaciation, climate change, and river erosion with Douglas W. Burbank, professor of geological sciences and director of UCSB’s Institute for Crustal Studies.

Professor Burbank’s research includes investigating interactions among climate, erosion, and mountain building, testing such ideas as the hypothesis that areas of high erosion become areas of rapid and extensive faulting (fracturing). As the principal investigator on an NSF grant that funded the work of researchers from eight institutions ranging from UCSB to Harvard, Dartmouth and MIT, he worked closely with the Department of Hydrology and Meteorology in Nepal and employed more than 20 Nepalese people. He and his colleagues built the world’s highest network of weather stations, which run across the Himalayas in an area where more than 15 feet of rain a year fall on the monsoon-drenched southern flank. 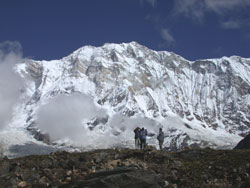 Following six weeks of field assistance, Michelle conducted independent field research on the history of a landslide 5,000 years before. The event was so colossal that it filled a valley with more than 1,200 feet of debris and created a lake 10 miles long. She searched for buried wood fragments to date the original landslide and determine how long the lake—now disappeared—required to fill and drain. In addition, Michelle figured out how much material had been trapped inside the lake—“a very valuable figure that lets us know how rapidly the mountains were eroding at that time,” Professor Burbank says.

But that’s not all. Michelle was also part of Professor Burbank’s work on a NOVA–style film of the local people and their relationship to the land. And at times during the trip, the research group dispensed basic medical aid to sick or injured people in the remote areas.

The Nepalese, for their part, were curious about the researchers and their equipment. Once, for example, a family of sheepherders walked over to the Professor Burbank’s group for a closer look. “We chatted a bit in our broken Nepali,” Michelle says —“but mostly, we gestured!”