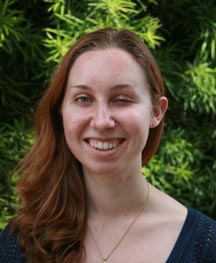 Audra Kosh loves math and people – as in studying people.

A cultural anthropology and math major, Audra produced research projects in both subjects for the 2009 Undergraduate Research Colloquium. They were “Factors Contributing to Assortative Mating Relative to Religion” in anthropology and “Matrix Number Theory: Factorization in Integral Matrix Semigroups” in mathematics.

“I just like analyzing people,” Audra explains, “finding out why people do what they do.”

Her first anthropology class was a physical anthropology course she took at a community college in her home town of Ventura. Since coming to UCSB, Audra has initiated or participated in four major research projects.

Her most recent anthropology project looked at how people choose mates based on religiosity. She designed a survey that was completed by 335 UCSB students who were selected at both religious and non-religious locations on campus. Her results on that project and her report on math matrices were presented at the Research Colloquium.

Audra also designed and conducted experiments on self-assessment and mate selection; cooperation in problem solving; and a campus religious organization, studying how it uses social events to build bonds with students and evangelize.

As far as math goes, she says she’s always enjoyed math, especially pure math. She became involved with the math matrices project when she attended a National Science Foundation-funded Research Education for Undergraduates program the summer before her junior year in San Diego. It was there she started working on the matrix number theory project with a San Diego State University professor.

Her latest project is another study of the anthropology of religion, following the work of an international missions group over the summer.

Audra hopes to attend graduate school in cultural anthropology on the East Coast, where she is particularly intrigued by the architecture and history. She also is considering entering the Teach for America program for two years before going to grad school. She has been active with honors research projects ever since coming to UCSB as a freshman.

Ultimately, Audra says, she would like to continue her research in academia, probably focusing on the areas of childhood and parenting in anthropology.