A Holistic Approach to College

“I’ve seen it happen again and again,” says Charis Anton, who moved with her family from Hawaii to Eureka, California, when she was eight. “Students come to college and immediately divide themselves. Their agenda is to get a good education, but they also want to do what they want to do and have a good time—and they completely separate those two goals. I strongly urge all students to meld their two sides—to figure out how their personal interests can work with their education!”
This unified approach to the undergraduate years gave Charis “amazing experiences” at UCSB. “I was determined to get as much as I could from my undergraduate years,” she says, “and I was on campus from 7 a.m. to 7 p.m. I also did as many activities as I could—volunteer work, student leadership, intramural volleyball, you name it.”
As a freshman in the College of Creative Studies, Charis started with what she had loved best in high school: literature and book art—a work of art in book form. In her first week on campus she e-mailed CCS lecturer and artist Linda Ekstrom to ask to be admitted to her course in letterpress (the printing process often used to make books-as-art).
“She let me in immediately,” Charis says, “even though most of the students enrolled were juniors and seniors. I was out of my league in such a focused group, but that challenged me!” 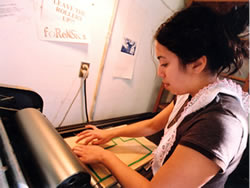 In a second book-art course she took as a sophomore, Charis found a way to merge making an artist’s book with both literature and her heritage. She examined the poetry of Haunani-Kay Trask, a professor in Honolulu and advocate of sovereignty for Hawaii, whose monarchy the United States overthrew in 1893. “Every Hawaiian knows her name,” Charis says. By Commencement 2006, she had produced and exhibited a beautiful art piece in which Trask’s poems appear in hand-set type on pages with handmade color prints.
To pay for the project, Charis applied for and received a $1,000 URCA award (Undergraduate Research and Creative Activities). “I wrote a proposal, supplied background information, created a budget, and got letters of recommendation. It taught me skills I’ll use in the future.”

New directions from the South Pacific

Charis’ interest in the cultures of the Pacific also prompted her to apply to biosocial anthropologist Shankar Aswani’s Pacific Islands Field Training Program. The summer of her sophomore year, she did research involving tribal communities in the Solomon Islands. “When I came back,” she says, “I knew I wanted to be an anthropologist!” 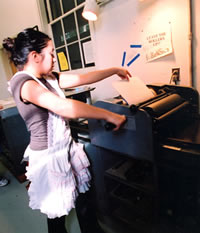 True to her philosophy about using college to the limit, Charis found a way to combine anthropology—which she added to her coursework during her last two years—with her love of literature and art. Now enrolled in the Ph.D. program in anthropology at UC San Diego, she says: “Anthropology is such an open field. I want to find out how the power of text has shaped Pacific Island civilizations and cultures. And I’ll go on making artist’s books!