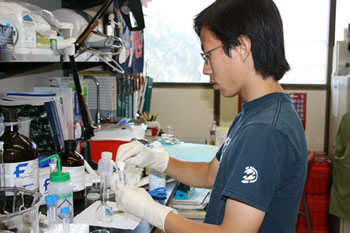 Chemistry major Duc Duong hopes one day to work in industry, or perhaps teach at a university. He’s got a leg up on the competition since he’s been able to engage in important research as a chemistry major throughout his undergraduate career at UCSB.

Working in the lab of chemistry and biochemistry Professor Martin Moskovits, Duc, 20, is studying nonmetal oxide surfaces and materials for potential use in sensing particles in air and water. The work has both commercial and military application. In warfare, the Army could use the results in molecular detection of toxics in the air, for example. Commercially, municipalities could incorporate the technology in water filtering to ensure public health, he explained.

Originally from Vietnam, Duc moved with his family to Santa Barbara when he was 10 and attended Santa Barbara public schools with his older brother and younger sister. He was drawn to chemistry in high school.

“It’s not too much math and not too much conceptual thinking, but a little of both,” he says. “I like having a variety in what to study. It has a lot of real-life applications.”

Duc was introduced to research when he was still in high school; he participated in a UCSB Apprentice Researchers 10-week program during the summer between his junior and senior years.

At UCSB, he got involved in undergraduate research in his freshman year through the Expanding Pathways to Science, Engineering and Mathematics program (EPSEM). The National Science Foundation-funded program identifies and nurtures students who are interested and show potential for going on to do graduate work in the sciences.

“Duc is awesome!” says M. Ofelia Aguirre, EPSEM coordinator for the California NanoSystems Institute. “He did research as a high school student in our CNSI Apprentice Researchers program, was a SIMS (Summer Institute in Mathematics and Science) ‘06 participant, and has been funded by the Agilent Foundation and the EPSEM program since winter quarter of his freshman year to work in the Moskovits lab. He is one of our education poster kids, so to speak.”

Duc plans to continue working in Moskovits’ lab through his junior year, and ultimately will go on to grad school. With the research experience he’s already had, he’s hoping he will be able to complete grad school quickly. He recommends doing research as an undergrad.

“Especially if (students) want to go into a research field or industry, I think it should be required as an undergrad,” Duc says. “You also learn to collaborate with other people. It’s something that all the science majors need.”