A Career in the Making 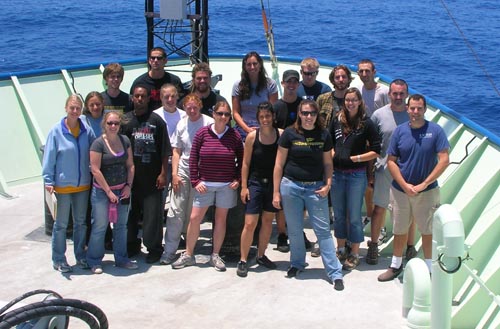 Although Eileen Becker doesn’t plan to join a forensic evidence team anytime soon, the résumé she’s assembling could be a deal-maker later on. She says one asset is her adaptability: Born in Aurora, Illinois, Eileen and her family lived in nine different places before she entered high school in San Diego. Another plus is her skill set—developed during her undergraduate research at UCSB—where she also refined her career direction.

A chemistry major, Eileen joined the lab of earth science professor David Valentine the summer before her junior year and tested ocean water samples to determine the breakdown of organic acids.  (Professor Valentine is a biogeochemist and geomicrobiologist whose research in part focuses on the environmental impact of the Santa Barbara Channel’s natural hydrocarbon “seeps”—often seen as tar deposits on area beaches.)

“I wanted to find out whether I eventually wanted to be involved in laboratory work or in field work,” Eileen says, “and I discovered I really like being in labs. I enjoy the day-to-day. My work doesn’t have to be new and different every day [as it is for crime-scene investigators]. I like getting things done, and would be happy to be in a forensics lab for the rest of my life, which is good to know. I enjoy taking an unknown and finding out exactly what’s in it.”

Eileen also discovered an aptitude that will be useful in the high-tech environment of forensic analysis: “Through my research, I found I really like to work with machines.” She figured out how to rewire an old high-performance liquid chromatography machine (HPLC) and then used it all year to characterize molecules in her marine samples.

From land lab to research ship

When Professor Valentine announced a two-week summer research cruise sponsored by the National Science Foundation, Eileen and nine other UCSB undergraduates signed on to assist the research team of faculty, post-docs, and graduate students. The undergrad researchers took a preparatory class, wrote individual research prospectuses, and presented their plans to the class. “We all learned a lot about what everyone would be doing,” she explains.

In July, the scientists boarded the Atlantis, a Navy-owned research vessel equipped with four main labs, including a wet lab, and a three-person research submersible called the Alvin.(The little round submarine was once used to explore the sunken Titanic.)

Eileen’s chief project involved science on demand: “Whenever Alvin surfaced with new samples [cores from the ocean floor that were sectioned and compressed to release water], we had to run all of our tests right away; otherwise, the samples would react with the air,” she explains. She tested for sulfate and sulfide, alkalinity, and ammonia concentrations in water from locations up and down the coast but primarily in the general Santa Barbara area. “It’s so funny—we have a lot of pictures of our campus that we took from our ship,” she says.

From ship to ocean floor

A standout on Eileen’s résumé will be her dive in the Alvin. “I was the only undergraduate to go on the voyage,” she says. She confesses she expected to find “posh chairs” inside the craft, but instead sat on the floor by the pilot, who perched on a metal box. Eileen handled the cameras, watching through the lone porthole for bubbles that would indicate a methane vent in the ocean floor.

She also contributed to a dive video (her portion is 43-33, indicating the dive number and day) that captures bubbles, fish, a rocky floor, giant squid—and fewer “crazy animals,” she says, than others spotted in the depths.

Now that the cruise, the data-gathering, mapping, testing, and preliminary reports have been completed, Eileen has new analytical skills and increased competence in lab settings. She will begin pursuing a master’s degree in forensics at George Washington University in the Fall, which she plans to follow with a Ph.D. in chemistry.

“All my undergraduate research has taught me to think outside the box,” she says. “When I first began, I couldn’t have thought of an idea for a project of my own. But now I’m more than ready to do that. And I’m also starting to work with some new instruments!”