One Student’s Path to Math Happiness 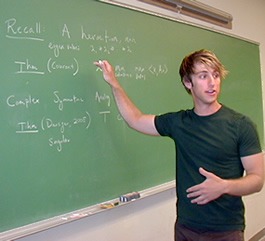 Questions, challenges, problems, and puzzlement are an inseparable part of Jeffrey Danciger’s life. He wouldn’t have it any other way—he’s a mathematician. Of course, some of Jeff’s friends had questions, too—people who, unlike him, weren’t earning dual degrees in physics and mathematics at the College of Creative Studies (CCS). “They’d say, ‘Oh, you do math research? What could that be? Calculus—isn’t that pretty much all there is?’ And I’d say, ‘No! There’s so much more!’” The commotion began with a freshman course called Algebra, Analysis, Number Theory, Combinatorics, and Probability. “It showed me that tons of interesting mathematical stuff was going on that I had no idea even existed,” Jeff says. “Day after day, the professor told us things that just blew my mind.”

The son of biologists, Jeff had cruised through advanced-placement calculus at Calabasas High School, north of LA—“but in this freshman course I got ideas about what math really is.”

Jeff concluded that “to really understand these things,” he needed a math degree—in addition to his future UCSB physics degree, for which he had given up admission to UC Berkeley. (A 2006 graduate, Jeff is now pursuing a PhD in mathematics at Stanford, with full financial support. “I had to pick one field for graduate school,” he says. “It doesn’t rule.”

Jeff used the immersion method to learn higher mathematics. The first-year graduate course in modern algebra he waded into when he was a sophomore is a good example. (Customized programs of study are a CCS hallmark.) “I had no business taking graduate courses,” Jeff says happily. “The first day, the professor covered more than everything I knew about algebra. The second day, I was completely lost.”

Eventually it will settle in, and you can understand.I was so determined,” he continues. “I think I wanted to prove to myself that I could do it.”

Jeff developed rapidly as a mathematician, says his faculty mentor Professor Mihai Putinar, who invited him to a graduate seminar on functional analysis to accelerate his learning. Eventually it will settle in, and you can understand.

I was so determined,” he continues. “I think I wanted to prove to myself that I could do it.”

Jeff developed rapidly as a mathematician, says his faculty mentor Professor Mihai Putinar, who invited him to a graduate seminar on functional analysis to accelerate his learning. “During the group discussions at the blackboard,” Professor Putinar recalls, “we remarked on the lack and the need of a min-max principle for complex symmetric matrices [tables of numbers]. And after an interval, Jeff produced the desired theorem! It is very natural, has an ingenious proof, and is totally new.”

Jeff had searched for a theorem for most of that fall quarter. During winter break, he began “deep consideration” of the problem. All the thinking over the months began to converge. “Suddenly,” Jeff says, “in one of my proudest moments yet, the key step to the proof dawned on me while I was hanging out with some friends one night!

“Coming up with an original idea and seeing that idea have an effect on other parts of mathematics were very exciting to me,” Jeff continues. “During my career I want to have more experiences exactly like that.”

Jeff’s paper describing the work was accepted for publication in the journal Linear Algebra and Its Applications (v. 412, 1, 22–29). Then he, Professor Putinar, and then Visiting Assistant Professor Stephen Ramon Garcia did equal parts of research applying Jeff’s min-max principle to function theory. The resulting article, “Variational Principles for Symmetric Bilinear Forms,” will be published in Mathematische Nachrichten.