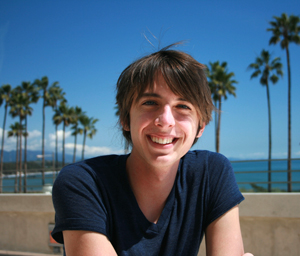 Jon Conway loves all things biological, especially at the small scale. And one can’t get much smaller than nanoscale, where one nanometer is one-one-hundred-thousandth the width of a single strand of hair.

So Jon, a junior ecology and environmental biology major, has embarked on a research project to study the effects of certain nanoparticles on plant life. Working in the lab of Bren School Environmental Science Professor Arturo Keller, Jon is exposing plants to nanoparticles from seed stage through plant maturity by watering the plants with a solution infused with titanium dioxide and cerium oxide at 100 parts per million. There has been little research done in this area, and what has been done has involved seeds alone, Jon explained.

The plant is Clarkia unguiculata (commonly called Farewell-to-Spring). Once the plants are mature, Jon will dissect them to search for signs the nanoparticles were taken into the plant’s leaves, blossoms, stems, pollen or seeds.

“One of the big challenges in doing this is actually finding the nanoparticles in the plants,” he says.

When he proposed using wildflowers to test for nanoparticles to his botany professor, Susan Mazer, she was supportive, even offering him greenhouse space to grow the plants.

“I’ve always been interested in the biological side of things. I wanted to do something with nanoparticles tied into the biology. There’s practically no research in this area right now,” Jon explains.

Originally from Santa Cruz, Jon wants to get his Ph.D. and ultimately go into biological research at the nanoscale. And he’d like to do his doctoral work with Professor Keller.

“It’s always been my dream, since I was a little kid, to be an environmental researcher.”