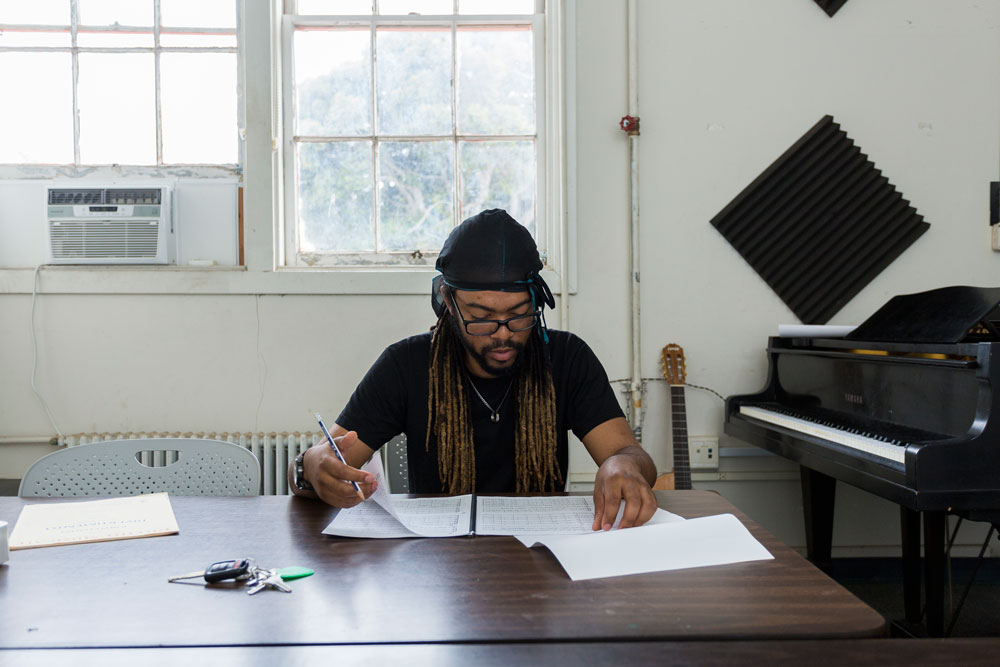 “As a composer, my research is what I produce with the knowledge I end up gaining. If I didn’t change my style, I wouldn’t be developing as an artist.”

For the first ten years of his life, Jordan Mitchell hated music. When his mom eager to keep Jordan out of trouble—forced him to take a guitar class, he begrudgingly complied, if only because his friends were also enrolled.

Six months later, Jordan was in love with music.

All it takes is one conversation with Jordan to truly hear the passion he has for the subject—a passion that extends far beyond just the creation of music. With three research projects, one filmed documentary, multiple albums, and years of teaching the incarcerated youth, Jordan has a musical background more befitting of a seasoned veteran in the field than a college student.

When Jordan came to Santa Barbara, he immediately became involved with research, eager to expand his knowledge in the field.

“Research is just curiosity,” he said. “As a composer, my research is also what I produce with the knowledge I end up gaining. If I didn’t change my style, I wouldn’t be developing as an artist.

Jordan’s latest song truly shows off that progression. A hip-hop comedy song, the ending of the song slowly transforms into a Mariachi piece.

The groundwork for that experimental ending was laid in part by Jordan’s research. For one of his projects, he researched the correlation between Bolero and Cool Jazz, discovering that both had similar historical roots. To confirm his suspicion, he transcribed both a Bolero and a Cool Jazz song, and found that the melodies and keys between the two pieces were indeed very similar.

From the moment he stepped on campus, Jordan has done his best to maximize every opportunity afforded to him. In the summer of his freshman year, Jordan was asked to fly to China to make a documentary about a musician there.

“That was a really big learning experience for me,” Jordan said. “They told me I made the documentary too dark, so I had three days to re-edit and change the entire tone of the film. It taught me a really valuable lesson about reading contracts before I sign them.”

Make no mistake, Jordan is an uber-talented musician, one who oozes with musical knowledge and passion. But what really sets Jordan apart is his drive—a drive that is in large part guided by his “passion planner”.

“I pretty much have a 12 hour day every single day, so I let my passion planner plan my day,” Jordan said. “I also always need to make sure I have time to write music, so I usually do that either late at night or super early in the morning.”

While Jordan loves creating music, perhaps nothing rivals his joy for teaching music. In his sophomore year of high school, Jordan’s teacher told him his grade in the class would be based on how well Jordan taught the other students for the rest of the year.

“At first, I thought he was crazy,” Jordan said. “It ended up being awesome, and at the end of the class my teacher told me he knew that I would be a great teacher.”

Jordan first started teaching in college as a byproduct of his sociological research, teaching the incarcerated youth in the Santa Barbara area about hip-hop and how it ties to racial identity. After that, he knew he wanted to keep going. For the last two years, Jordan has taught music at the Isla Vista teen center, where he loves building bonds and seeing the success of his students—even attending all of his students’ graduations.

In both winter and spring quarter, Jordan will be teaching classes in the music department based on his research. His winter class will tackle the similarities between hip hop and live orchestration, while his spring class will discuss the sociology of modern hip hop.

Despite his immense individual talent, Jordan has little interest in blowing up or touring. His long-term goal is to return to his alma mater in Stockton to teach music composition, where he hopes to impart his research and knowledge to the students.

“Teaching gives you an eternal experience, where you can see the domino effect that your teaching has on someone’s life,” Jordan said. “I love pushing students so they can reach their 100 percent.”