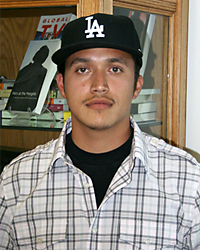 Jose Lumbreras grew up in Compton, where a lack of afterschool programs created an atmosphere of aimlessness for many youth. Despite the social, economical, and political disadvantages, a sense of community developed and contributed to Jose’s ability to discover a path that led to success in high school and, ultimately, college.

Jose’s passion for soccer led him to visit UCSB one summer for a soccer camp, and so when it came time to apply to colleges, he chose Santa Barbara. He began as a business and economics major, but in his freshman year took a sociology class, which included a field trip to the local jail. There he met sociology Professor Victor M. Rios. Their backgrounds overlapped to some extent – Rios grew up in Oakland – and Jose realized he wanted to learn more about Rios’ work, which focuses on urban ethnography, juvenile justice, community studies, and Latina/o sociology.

Soon Jose became Rios’ research assistant and they began work on a study of the sociological implications for youngsters who have been marginalized and targeted in society. The result was a paper on how youth understand their situations and what the reservoirs of knowledge are that they use to make choices when they are faced with segregation, repression, and racism.

A 2010 graduate, Jose begins a Ph.D. program in Ethnic Studies at UC Berkeley in the fall. Ultimately, he wants to teach at the collegiate level, just like his mentor.