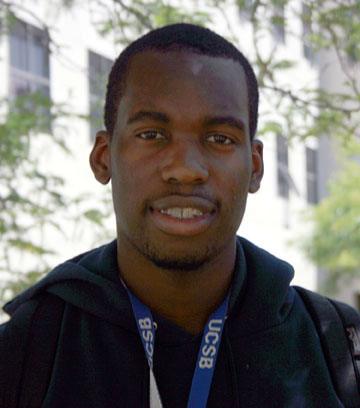 Electrical engineering major Kenechukwu “Kenny” Akametalu jumped headfirst into undergraduate research, getting involved in the second half of his freshman year with a project called “Thermoelectric Semiconductors.”

Working in electrical and computer engineering Professor Chris Palmstrom’s lab, Kenny tested various substances for their electrical conductivity, in other words, to see how easily current passed through them and generated voltage.

“We are still looking for new materials to be applicable in high temperatures, putting them into a car engine, for example,” Kenny explains. “The material has to be able to function – it has to withstand high temperatures while converting the thermoenergy into electrical energy.”

His research experience as a freshman was facilitated by the California NanoSystems Institute at UCSB. Kenny saw fliers announcing undergrad research opportunities when he arrived on campus and wanted to see if he’d like research.

After freshman year, he decided to stay on campus through the summer and continue working in the Palmstrom lab. In his sophomore year, Kenny plans to focus on getting involved with different organizations and applying for leadership positions to broaden his college experience.

Kenny says he has always been drawn to science and knew he wanted to do something with engineering. So when it came time to apply to UCSB and declare a major, Kenny used Google to discover which were the top engineering fields today. Electrical engineering won out, followed closely by chemical engineering, he says.

His favorite teacher in middle school got him excited about science.  “He taught me pretty much the principles of biology,” Kenny says.

That’s why he may be interested in teaching. Kids have to be hooked early, Kenny says. You have to show them the cool phenomena first and get them interested. Mentorship programs would be good, too.

“I want to start teaching people about science early. That’s the only way to get them past the fear of something being too hard,” Kenny adds. 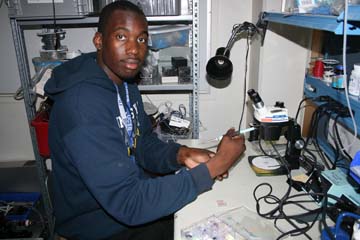