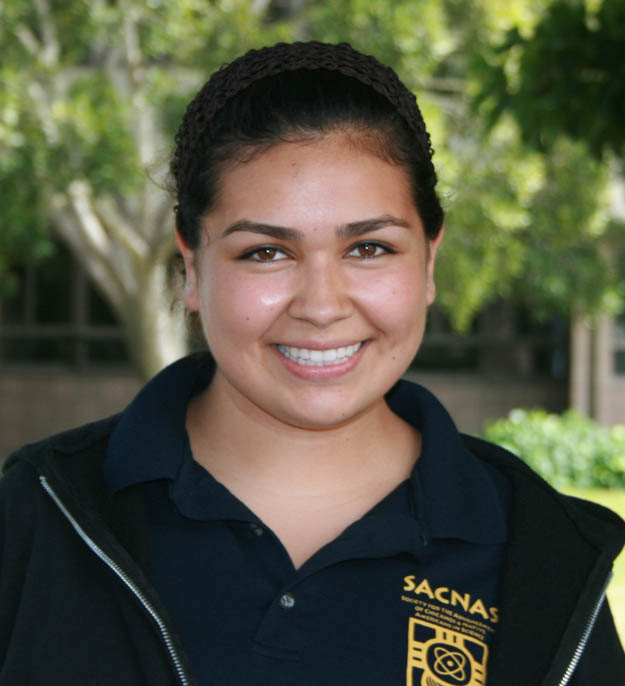 There are many ways to step into an exciting research opportunity as an undergraduate. Just ask Lourdes Velazquez, who participated in several mentorship programs before she landed a research position in a lab as a freshman.

Lourdes is a biology major minoring in physics and astronomy. A junior, she has worked in Professor Deborah Fygenson’s physics lab since the second half of freshman year and was one of the authors of a paper published in February 2009 on DNA and fluorescence called “Hairpins with Poly-C Loops Stabilize Four Types of Fluorescent AgnDNA.”

In the study, Lourdes and her fellow researchers worked with a graduate student to investigate the generation of fluorescence in small strands of DNA that are treated with silver nitrate and a reducing agent. The goal is to discover what causes the fluorescence and, ultimately, how light interacts at a very small scale, on the order of nanometers. With that knowledge, researchers might then use it to act as a tracer in the body, for example, Lourdes explained.

Working with a small strand of DNA, they focused on the hairpin loop of cytosines and used different combinations of the silver nitrate and the reducing agent to get different colors of fluorescence. The more silver nitrate that was added, the more red the fluorescence; the less silver nitrate, the greener the color. While the team was successful in reporting these results, more work in the lab will help them determine what actually creates the fluorescence and what causes the changes in color, she says.

Even though she’s a biology major, Lourdes’ mentors are encouraging her to consider focusing more on physics. She plans to get her master’s degree and then perhaps teach at the community college level before deciding whether to pursue a Ph.D. and possibly a research career.

Lourdes first got interested in science in high school when she took a biology class from an excellent teacher. Then she took an astronomy class at her local community college and fell in love with that science as well. She was accepted into an apprentice researcher program through the California NanoSystems Institute (CNSI) at UCSB in the summer after her junior year of high school. She worked with mentors in a biochemistry lab, which turned out to be the decisive factor for her choosing to apply to UCSB, she said. Then the summer after graduation she attended a two-week Summer Institute in Mathematics and Science (SIMS) program at UCSB.

Coming in as a freshman was easier having done those programs, she says.

“You’re not as intimidated. You already have friends in the program so you feel so much more comfortable.”

Once she arrived, she joined the Society for the Advancement of Chicanos and Native Americans, a club that supports and encourages minority students in science pursuits. By the middle of her freshman year, she was accepted into Professor Fygenson’s physics lab as an undergraduate researcher, and plans to continue that work through her junior year.

“I would also recommend the CAMP (California Alliance for Minority Participation) program,” Lourdes says. A nationally funded program offered through UCSB’s Materials Research Laboratory, CAMP is a 10-week intensive research experience for eligible students interested in a career in science, engineering, technology or mathematics. Lourdes attended it the summer between her freshman and sophomore years.

If you’re interested in scientific research at UCSB, Lourdes says take advantage of the many programs available. They are stepping stones to success.