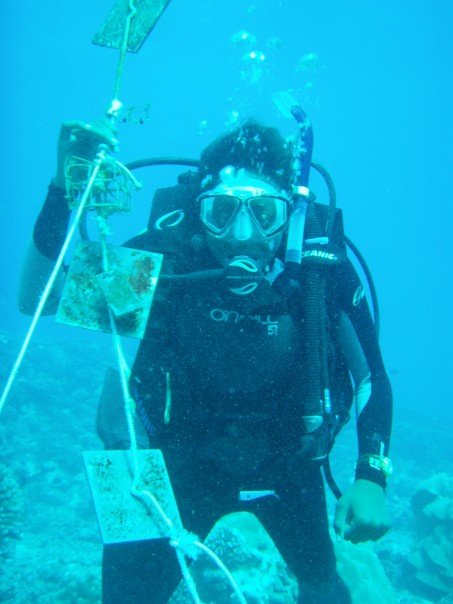 Sammy Davis, a UCSB senior majoring in French and in aquatic biology, says by now she’s used to being asked about her famous name and her combined academic interests. Both answers are easy. “My parents were great fans of Sammy Davis, Jr.,” she says. As for her interesting combination of majors, she explains she had wanted to study marine life ever since she was a toddler in San Diego.

“Then I cemented my goal in the third grade, when my class visited a floating lab, put out nets and pulled in things from the sea!”

Sammy, who also has an affinity for languages, decided to major in French after studying the subject in high school. (She added a considerable amount of Tahitian, a Malayo-Polynesian language, to her reserves during a recent summer undergraduate research trip to the South Pacific.)

The idea of scientific inquiry crystalized in Sammy’s junior year, when she took a course taught by marine population and community ecologist Russell Schmitt, director of the Coastal Research Center at UCSB’s Marine Science Institute. When she told him she wanted to do undergraduate research and ultimately become an aquatic biologist, he was very encouraging.  “Professor Schmitt suggested courses to take, told me the diving training I’d need, and talked about research opportunities and all the career possibilities open to me later on,” says Sammy, who has since acquired her basic and scientific diving certificates.

Sammy spent spring break in 2007 doing research diving at UCSB. A break of another kind came that summer. Sammy and four other undergraduates joined a research group led by Professors Schmitt and Sally Holbrook, vice chair of ecology, evolution and marine biology. The team flew to Moorea, in French Polynesia, to study the coral in the reefs that surround the tiny island. Coral reefs are threatened by the effects of such environmental changes as higher water temperatures and increased ultraviolet radiation, which are associated with climate change, and factors such as deforestation and agricultural development because of population growth. The work is part of the Moorea Coral Reef LTER (Long-Term Ecological Research) project, sponsored by the National Science Foundation.

“In Moorea, I assisted a graduate student with her work for Professor Schmitt. We also came up with an independent project in which we tested coral growth in a reef where our work was subject to changing ocean conditions.” She concedes the experiment was difficult to execute, but adds: “We had help from many people and could always turn to someone else with questions or to get assistance.”

That experiment became the basis of Sammy’s senior honors thesis.

In November 2007, Sammy and the other undergraduate students presented their projects in posters at a meeting of the Western Society of Naturalists in Ventura, California—where Sammy says she obtained a lot of knowledge and useful information, and did some valuable networking.
Sammy is pursuing her Ph.D. and ultimately wants to teach and do research at a university—perhaps in a locale in which French will be useful. “I joke with Professor Schmitt that I plan to take his job someday. And he says, ‘Go for it!’”

Here are the basics Sammy believes are necessary for being a good undergraduate researcher: