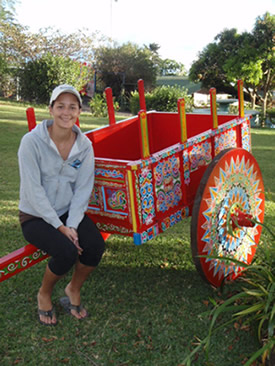 Sarah graduated from Palo Alto’s Gunn High School in 2005 and got involved in a LEADS research project after her sophomore year at UCSB, where she is an aquatic biology major. Working with Hunter Lenihan in the Bren School of Environmental Science and Management, Sarah spent summer 2007 investigating the spatial and temporal variation in “recruitment” of lobster larvae to the Santa Barbara-area coast.

“In a nutshell: Female lobsters hold onto their eggs until they hatch, releasing tons of larvae into the ocean,” Sarah explains. “These drift offshore for many months and grow (to be about an inch), then return to settle onto the bottom near-shore and grow into adults over the next few years.

“So, I put out collectors to catch these little guys (which had never been done in the area, but has been done in other countries). My sites were at Campus Point and at Santa Cruz Island. I didn’t get very many little lobsters, but the peak in settlement was much later than was originally assumed, and now there’s more interest to set up a monitoring program as is done by PISCO (Partnership for Interdisciplinary Studies of Coastal Oceans) for rockfish.”

In summer 2008, she embarked on a GIS research project at UC Santa Cruz with Professors Bernie Tershy and Don Croll and their non-profit group Island Conservation. Island Conservation eradicates introduced species from islands in the Pacific and hopes to expand globally with increased funding. Sarah worked with a graduate student on a project to determine in which area or country in the world it would be the best to set up shop.

“This is essentially an optimization study using a model based on many factors in the realms of government, economy, geography, etc.,” Sarah says. “I’m mostly making figures for her (the grad student’s) dissertation and for Island Conservation from a geographical analysis of the worlds’ islands.”

After graduation in 2009, Sarah hopes to work for several quarters – perhaps doing research internationally in Latin America (“to improve my Spanish”) or the South Pacific (“where it’s also warm to dive a lot”) before going to grad school.

“LEADs got me into a really active lab, and the funding has allowed me to participate a lot. It has opened my eyes to how research works, that you can pursue what interests and excites you, as long as someone else feels it’s important too!”