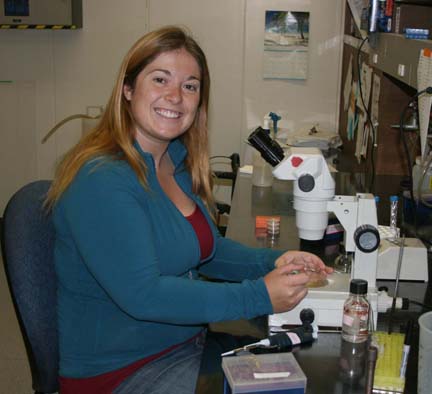 Sierra Simpson knows worms, or, rather, nematodes. She spent hours and hours with them as an undergraduate researcher during her UCSB career and as a result, fell in love with scientific research.

Sierra began as a lab assistant, washing glassware and preparing media, but quickly jumped into participating in undergraduate research. Her time in the lab was “invaluable,” she says.

Sierra was also asked to be the course coordinator/assistant for the embryology course at Marine Biological Laboratory in Woods Hole, MA, for three summers. There she learned techniques most graduate students would hope to learn.

“It’s cutting-edge science. You sit at a table and never know if there’s going to be a Nobel Laureate talking about ‘this funny protein’ or ‘a silly idea’ they might have had – which turns out to be the next big thing,” Sierra explains. “I got to put my hands on the pulse of developmental biology. It was an honor to work with and learn from such talented scientists.

“Now I have skills that are marketable. I know protocols. I can go into any lab and pick up what’s happening quickly and efficiently. Having that practical experience; it’s something you don’t get in the classroom.”

Which explains why conducting research as an undergraduate is such a good idea. You learn from the people who are doing novel research – you get to be a part of it.

“I think for most scientists, it’s so important to understand what you’re getting into for graduate school,” Sierra adds.

You can sit in a lab for eight hours and not get the results you want, but you also realize how much the experience can mean for your growth and development as a researcher, she says.

One of Sierra’s passions is puzzles, and she said science is “like a labyrinth. Eventually you’ll get to the answer, but you never know what twists and turns you might take to reach your final destination, and it might not even be where you anticipated.”

The journey of undergraduate research is fulfilling, challenging and fun, and it was certainly a valuable addition to her undergraduate career, Sierra says.

Sierra used her research in the lab to develop a project for the campus-wide Undergraduate Research Colloquium in her senior year. Entitled “Nanoparticles, Bombarding in Vivo Systems,” the work sought to determine the dispersal of nanoparticles in living models using C. elegans (a nematode) and X. Laevis (African clawed frog).

Sierra says she “put particles in just about anything. I knew that the particles I was using were fairly non-toxic and I had all of the major developmental models at my fingertips, it’s a place for discovery.”

The studies set a foundation for using particles as delivery devices in developmental models with the hope of elucidating functions of particles for drug delivery in other systems.

Sierra says she loved being a part of the colloquium. She enjoyed walking around and talking with the other undergraduate researchers about their projects.

“Not to mention you’re always surrounded by brilliant people, challenging you, trying to help you be the best you can be. Having a different perspective from your peers is one of the best ways to encourage the evolution in research of all areas.”

In addition to her lab experiences, Sierra also was involved with extracurricular activities throughout her undergrad years. She was the women’s track cycling captain and co-race promoter for “collegiate fixie fever,” the first track cycling event to occur that was not a national competition. She went to collegiate track nationals in 2008, where the UCSB team placed 11th out of 25 teams. And she was a sponsor liaison for the Encino velodrome, finding funding to support its year-round activities. Sierra also worked part-time during her undergraduate years.

Eventually, Sierra plans to get her Ph.D. in science and continue research in the developmental neuroscience field, hopefully continuing work in drug-delivery design.