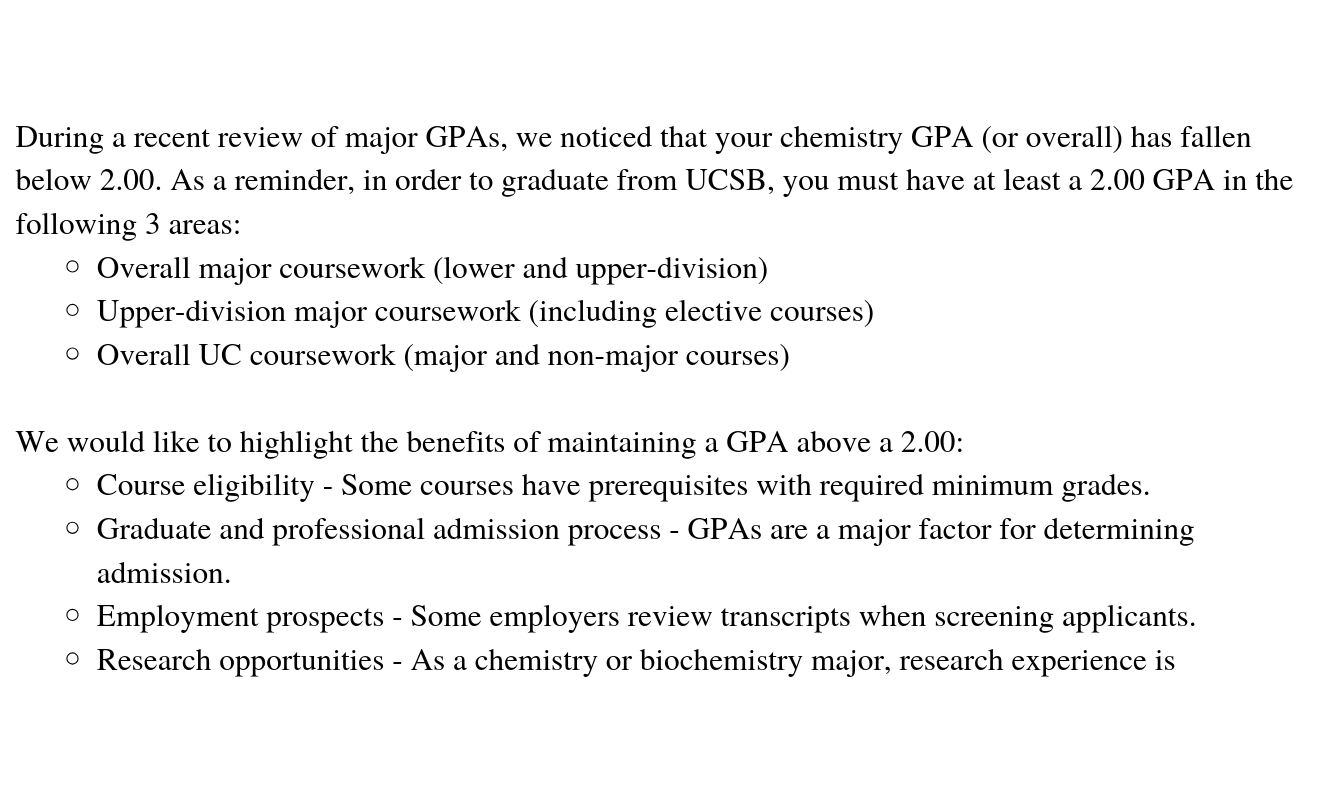 A Sense of Fresh Air

The stress of school is a heavy, dense sort of fog that follows me and several of my UCSB peers from one point of campus to another with each progression of any given quarter. Ultimately, this creates an atmosphere that is easy to suffocate in. Just recently, a mass email was sent to every undergraduate Chemistry/Biochemisty major and minor that attend UCSB, and likely several faculty members. The purpose of this email was a Major Progress Check to an individual in the department who had earned a GPA under 2.0 for the year. The email “highlighted the benefits of maintaining a 2.0 GPA”, basically a reminder of being dismissed from the major if the GPA is not brought up, the email told an entire community about our fellow Chemistry Major’s struggles. For me, this situation filled my lungs with that dense fog and I felt embarrassed, upset, in utter amazement of such carelessness. I also felt a significant sense of hope for my peer, still believing in this stranger’s academic career. Following this email there was another, apologizing and asking the hundreds of people to please delete an inappropriate mistake made by one academic advisor. This mistake reminded me of the skill and fuel of opportunity and how in academia, the ranks are clear and opportunity must be gathered the same way one might gather pieces of a puzzle, with patience and intent. It took me a while to understand that your opportunities do not have to derive from your GPA, but can be from any place of passion, background, and individuality. There was a time here at UCSB where I received this same email and following this grief, I raised my GPA, and told myself that I would never let a number keep me from the experiencing of technique and the artform of working in a lab.

Applying for a program was my way of putting puzzle pieces together towards an opportunity like the Gorman Scholars program. A program that allows me to explore my own research project and to completely immerse myself in a research setting specifically in a Polymer Chemistry lab. Going into this, I was prepared to be surrounded in that dense fog but surprisingly I feel a sense of fresh air. The experiments, notes, papers, presentation, these factors that come together to ultimately provide me tools towards becoming skillful and creative, all without worrying about grades or GPA’s. The purpose of my work has many delightful intricacies and I can diverge down the various rabbit holes in which my project leads me into, all without having to center around dull topics that a class setting provides from day 1 in the syllabus to day 45 during that impossible final. Research is not a class. Presentations are not exams. Lab work is not school work. I think it is important for all students to remind themselves that the opportunity is there for you to grab. Even if you are barely scraping by for whatever reason, an opportunity will be open for you to gather the tools you DO have to go get that opportunity. So far, I have had a very positive research experience, with a great mentor and steady pace in the lab. Although I do not care to work in academia, I do want a career where I can have a creative voice in my research and continue to collect skills in which I can help optimize the world around me as a Chemist. 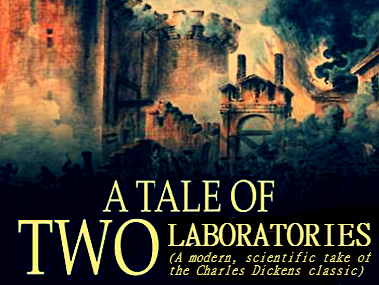 A Tale of Two Laboratories

Perhaps one of the greatest points of contention for a college student is deciding what comes next: academia or industry. Being one of the few fortunate students able to participate in both an internship at an academic neurobiology lab and an internship at a local biotechnology startup company during my spring quarter of sophomore year, I have a few pearls of wisdom for those who do not yet know for certain which type of internship suits them best. And, being a literary art enthusiast who tries her best to entertain herself and her audience when writing blog posts, hereby commences the official entry below:

It was the best of quarters, it was the worst of quarters. All the while completing the last installation of her introductory biology, organic chemistry, and physics courses, a young girl with an ambition larger than her arms could hold endeavored to continue her work in ye old Laboratory of Neurological Sciences while exploring the new realms of agricultural chemistry to help solve her village’s strife with quickly rotting produce.
Girl, as she preferred to be called, had been enticed by the Industrial Order of Agricultural Science and its proposition to cure local and world hunger with their developing product. She believed her skills would be adequate enough to contribute positively to the order of brilliant, young scientists, and adored the impassioned effort each of the members of the order gave. At the same time, she was just as equally passionate about her work in her village’s Laboratory of Neurological Sciences, and could not bear to part with the project that she and her mentor have worked on for a year together.
After three months of laborious undertaking with both ye old Laboratory of Neurological Sciences and with the Industrial Order of Agricultural Science, Girl had found herself with much insight to document in her personal journal. The experiences had been fruitful and worth her while, but she had noticed very stark discrepancies between the two research positions that had graced her.
Her work with the village Laboratory of Neurological Sciences involved much less interaction with her fellow laboratory peers, aside from her own mentor and the principal investigator of the laboratory, although the occasional conversation with an expert in a particular laboratory technique was necessary. She appreciated the independence, however, as having a project tied so closely to her name made her feel as though she were the mother of the project, having to attend and care for the project as it matured into a complete research publication with statistical results that can be shared for the rest of the world. In this realm, she was in charge of herself and her surroundings. There was much flexibility with her project, with many forks in the road as experiments fail and succeed. If one result proved that another path must be taken to discover prospective cures for neurodegenerative disorders, she followed the path, even without entirely knowing what may await her at the end. Ultimately, her research success depended on the amount of effort she was willing to put in; the more seeds one planted, the better the harvest.
Work with the Industrial Order of Agricultural Science followed a different pace, although the general requirement of her was to perform productive research on a given subject. In this case, the subject had been organic chemistry in the context of preserving agricultural produce. Unlike with the pathway she followed with her work in ye old Laboratory of Neurological Sciences, there was a specific destination to be reached with the Industrial Order of Agricultural Science. She may take a variety of routes to get there, but she had to get there. Deadlines were more strictly enforced; while this aspect may have deterred some from the prospect of an exponential amount of work, she knew she had a team of close colleagues who were almost always available for assistance when needed. The research was a team effort, and each member served as an appendage to the larger body. Projects were often mandated by the head, but without the proper functioning of each body part, the body could not thrive.
Two laboratories, both with the interest of facilitating research to be of benefit to the populace. And yet, the two laboratories exist as separate worlds with science being the only foundational similarly between the two. As different as the experiences may have been for Girl, she found many benefits in participating in research in both ye old Laboratory of the Neurological Sciences and the Industrial Order of Agricultural Science. And although she had intended for her journal entry to be a determining factor as to what she hoped to pursue in the future, she found herself no further from where she began. Each option was equally as enticing to her. At this point, she knew not which direction to follow, but knew one thing and one thing alone: that as long as she is contributing to the world of scientific research, she is satisfied.

Essentially, having both academic and industrial research experience has not really helped me narrow down my professional pursuits after completing graduate school, but the time will come when the decision will make itself apparent to me. (There’s still some time, thankfully.) As for you, reader, who managed to tolerate my awful attempt at a not-quite-story to explain what I believe to be are the major differences between academia and industry, only you can go forth and experience one or the either (or both) and make a decision for yourself. If possible, explore internships in both fields. If given only one option, even if it is the option that you do not believe is the one you are leaning toward, try it anyway. Personal experience insight is valuable, and research, despite what setting, is research.