My debut in undergraduate research has been (at least in my mind) tumultuous. If I were to condense the experience to something that gets the point across, I would point you to this image: 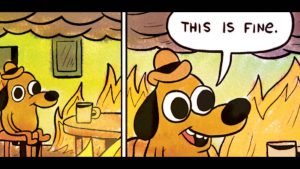 First, some backstory. I am a physics major. While I love the major, I also wanted to pursue some technical skills like coding and knowledge of hardware. That’s why I decided to venture into the field of electrical engineering for my first foray into undergraduate research. Interdisciplinary research is big these days, and lots of physics majors don’t limit themselves to research within just physics. I figured that starting in a different field would be fine. The challenge was finding a way to do so.

The AIM Photonics program helped me with this, introducing me to the Blumenthal group (led by Dr. Daniel Blumenthal). Here I am currently, working on a research project that is heavily based on hardware I’ve heard nothing of before, software programs I didn’t know existed, and programming languages I’ve not learned. In other words, I was a bit out of my element.

I’m liking the challenge. I learn that much more because I knew so little about the tools I’m using. I learn things I wouldn’t normally learn.  At the same time, there are downsides. I feel that I have to learn more than someone who is an electrical engineering major (where they might traditionally study these things). It’s some good parts, and some bad parts.

And to you reading, know that this is normal. The process of undergrad research demands that you learn about things you’ve never seen. If you’re like me and start your research career in a different field, then you might know even less. That’s where most everyone starts. We spend weeks and months learning more about our projects, our tools, and our fields. It’s normal to find it intimidating- we’re just interns starting out. We don’t have the experience our mentors do.

We’ve got to take it one day at time, and then we’ll grow out of this phase.

My first research topic was “given” to me at the beginning of last summer. I was helping a professor with his research on California K-12 spending. This particular research project was on understanding how rational K-12 schools are. Rational was defined as not spending all of your funding in one year. For example, if schools expect X dollars and they end up receiving Y, where X is less than Y, do they only spend X dollars and save the difference. Basically, we want to know if K-12 schools save for a rainy day. My task in the project was to get a better understanding of the history of K-12 spending, history of state spending, and also to gather data on K-12 funding. We were focusing on the last 30 years from 1980 to present, and having a good understanding of history can help make the numbers make sense. I was taught that research in its basic form tells a story, and all the math/statistics are tools we use to tell that story. At first, I felt like I was playing catch up. I knew little to nothing about California’s budget or different policies/ laws that affect its budgets. However, the more I read the more I realized some very interesting themes. One was that K-12 spending was fairly steady unlike other departments, and that California had a lot of budget deficits this just means that the state was spending more than its income. Over fifty percent of the time from 1980 to 2012 California had budget deficits. While my main concern was on K-12 spending this new bit of information was very interesting.

I was quickly learning that California’s budget had a lot of moving parts, surprising I know, its not like California has the largest economy of any state. We gave weekly reports on our findings and as the summer came to close I began to focus more on this idea of budget deficits. After, a couple of failed attempts to understand the deficit problem with regressions, we decided that it was best to look at the big picture. One useful tool used to look at the big picture is a chart. I created a lot charts from total spending, to growth rates, to spending as a fraction of total spending. From these charts came more insights and more questions, like why is that Corrections/prisons spending does not appear to be affected by recessions, and why does Higher education spending appear to mirror correction spending? These are questions I am still trying to answer but the interesting thing is that these questions are ones that I came up with. This new research question is my question. My professor says that this is what good research does. We start with one topic and as we begin to understand that topic we usually find that it leads us to other questions. New research questions are sometimes found when you’re not even looking.

There is one crucial component of being a member of the McNair Scholars Program: you must conduct research! I was very excited to become an undergraduate researcher, but I didn’t know what I wanted to explore. My love for language made me want to investigate everything and anything, but realistically I had to find a specific topic- and fast. With only eight weeks to develop and execute an original project, the clock was ticking.

My mentor provided me with classroom video recordings for her own research to use as data for my project. Not knowing what linguistic goldmines the data would hold, I watched all the recordings and noted segments that interested me. One interaction in particular immediately caught my attention. Two Latina high school students shared their experiences of being labeled because of their language use. What really struck home for me was a classroom discussion in which they revealed that they had been labeled as “sounding pocha” by their own families. Pocha is a negative term that is used to describe Mexicans who are born and raised in the U.S. who speak American Spanish. I was immediately able to relate to these two girls because I too have been called pocha by various family members. From that moment, I knew I wanted to explore language-related experiences of Latinas. I wasn’t doing this research just to fulfill a McNair requirement; I was doing this research for me: I wanted answers.

After going through systematically going through the data, I identified four ideologies, or cultural beliefs, about language that Latina youth face in their daily lives. The first ideology I came across was the idea of the superiority of the standard. In this belief, Standard English (English that we learn in the classroom) is believed to be “better” than other varieties of English, such as African American English and Chicano/a English. The second belief I identified was that for any social group, such as Mexican Americans, there is a specific linguistic variety that is essential to its identity, such as Mexican Spanish. Third, if someone doesn’t use the same linguistic variety as particular group, they are considered to be inauthentic. The final ideology, I came across was the idea that English is the dominant language and all other languages are beneath it.

These beliefs are problematic because they create linguistic insecurities; that is speakers don’t feel proud of or confident in language. I have been able to relate to all of these ideas at one point or another in my life and so I know first-hand the negative repercussions of these ways of thinking. On the bright side, just as I was able to relate to the two girls in the data because of our similar experiences, youth can relate to each other and form bonds to help deal with and fight these ideas. I am fighting them through my research; my research isn’t just information: it’s power.

Being a UCSB student comes with many perks. From a beautiful campus to dedicated professors and everything in between, we really do live, study, and thrive in paradise. Endless opportunities wait behind every door; all we need to do is find them- or in my case, let them find me.

My freshman year I attended a seminar regarding the importance of undergraduate research. The speakers mentioned that we were lucky to attend one of the nation’s top research universities (whatever that meant). I was busy worrying about my classes, transitioning from being away from home, and trying to survive crossing the bike paths between classes, so trying to add research on top of that felt a bit overwhelming. Little did I know that within two years I would be part of one of the most well-known national undergraduate research programs, the McNair Scholars Program.

Now, everyone has their own story as to how they began their journey as an undergraduate researcher, but I consider mine to be anything but ordinary. Winter quarter of my second year I was enrolled in Linguistics 131: Sociolinguistics with Professor Mary Bucholtz. At the time, I had no idea that this course would change my entire undergraduate experience. I attended every lecture and actively participated in class discussions to the point where she learned my name, a proud feat for a beginning linguistics major. Impressed with my performance in her class, Professor Bucholtz offered me an internship. Without a second thought I agreed and soon I had become a mentor for her outreach program School Kids Investigating Language in Life and Society (SKILLS). I was proud of beginning an internship before the end of my second year, but nothing could have prepared me for what was to come next.

As the year drew to a close, I thought that would be the end of my relationship with Professor Bucholtz, but, boy, was I wrong. Late in spring quarter she suggested that I look into the McNair Scholars Program. After exploring the McNair website and keeping the words of the panelists from the year before at the back of my mind, I agreed to apply. After a rigorous application process I received the results: I was accepted! That marked the beginning of my experience as an undergraduate researcher.

Based on my experiences, I have two pieces of advice for prospective researchers. First, professors are your friends! They are crucial to getting involved in research, so let them know who you are. Secondly, if opportunity comes knocking on your door, roll with it. One thing can lead to another and before you know it, you will be doing things you never dreamed you would be doing. Take it from me, I had no idea how I was going to become involved in research, and looking back I’m still in disbelief. Now, I look forward to seeing what else the future has in store for me.