An Introduction to Magnetic Tweezers

Today I am going to introduce you to an instrument that is widely used in biophysics and biomaterial research: magnetic tweezers.

-An illustration of a magnetic tweezer 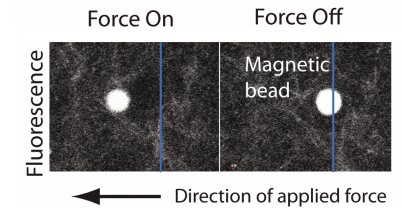 -Equation of the torque on magnetic beads,  where m is the magnetic moment and B is the external field

The advantages of allowing users to control the magnitude and the direction of an applied force precisely and the ability of producing rotational motion make magnetic tweezers great instruments in single molecules and soft matter studies. Considering their broad applications in various projects, Dr. Valentine’s group has done work on optimizing magnetic tweezers and making them more portable. Great work is being done in this area and the advances in instrument development will certainly help researchers make progress in various areas in biophysics and biomaterial at a faster pace.

Kuang Wei is a fourth year student majoring in Physics. He is interested in the development of novel technology and all kinds of fascinating physics topics.