As an undergraduate researcher I have become very familiar with using an atomic force microscope.  This amazing tool uses a very small device called a cantilever, which is basically a tiny record player needle made of silicon.  The machine taps the tip of this cantilever along the surface of the thing you’re trying to image and generates an image based on the interactions of the cantilever tip with the sample.  The movements of this cantilever are measured by bouncing a laser off the back of it and measuring how the deflection of the laser changes using a photodetector.  When the laser goes over a bump the laser will also move and a photodetector which collects this light records this change.

Now most of the time the thing you’re trying to look at is already so smooth you cannot tell that there is any flaw by looking at it with your eyes, or sometimes even an optical microscope.  The atomic force microscope however is amazingly detailed and is able to draw an extremely detailed picture of what the surface if your sample looks like. 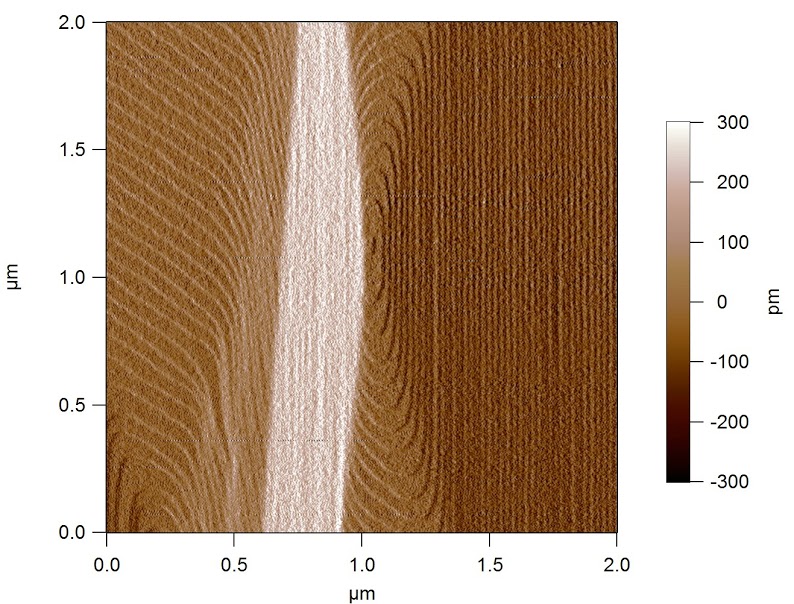 This image shows a 4 sided pyramid structure which grew as a result of a threading dislocation in a crystal I was growing.  The lines you see on this pyramid are actually atomic steps. Yes you read that correctly, they are layers which are a single atom thick. How’s that for high resolution?

I am consistently amazed with the information this tool is able to gather.  This amazing technology allows for tremendous insight into materials science.  In this field where there are countless different polymers, and crystals which are being grown and synthesized by scientists; having the ability to look this close at the structure of the material itself can lead to a much deeper understanding of how these materials actually form and function.