Am I an Imposter? 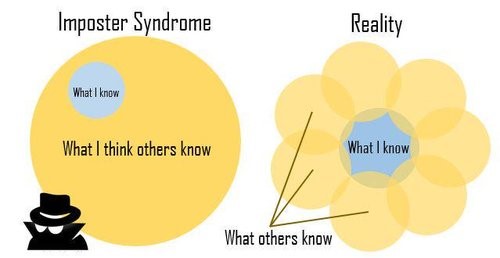 Imposter syndrome is the fear of being exposed as a fraud that overshadows your actual accomplishments.

Around March, I heard that I got accepted to the AIM Photonics program at UCSB. I was so happy since UCSB is on the top of my list for Ph.D. programs. As the semester came to an end, I had a realization that I didn’t know anything about photonics. I read up on the material that my mentor sent me, but I didn’t understand most of it. I didn’t know what I would need for my research. Would I just need to understand concepts in electromagnetism? Are the materials that I learned at Cal State Long Beach enough? About a week before the program started, I started to get nervous and doubtful about my success. What if I don’t leave a good impression and have a negative impact on my chance of getting into the Ph.D. program at UCSB? What happens if I embarrass myself?

Soon, the first day of the program came and I came to realize that I was the only person that was from a Cal State, driving me to question myself even more. Was I smart enough? Could I really do this? The first day of starting my project was even worse. I couldn’t answer most of the questions that my mentor asked me– even the ones that I knew– because I kept doubting myself. I had imposter syndrome. Even though my mentor, who is extremely kind and patient, told me it takes time to understand everything, I was so mad and frustrated at myself. I pushed myself to review and learn concepts by myself, but I felt like that wasn’t enough. After I asked a question, I felt like I should have come to the solution by myself. I felt bad for asking for so much help and bothering my mentor that I always had to take a moment to consider whether to ask him or not. This was how my first two weeks were like. I continued to stay in the lab for long hours not because I had a lot of work, but because I spent so much time second guessing myself.

On the Tuesday of the third week, we had an event where we had dinner with faculty, and Dr. Luke Theogarajan attended. He is the professor that I initially wanted to work with, so I was very excited to meet him. During the event, he said something that blew my mind. At the beginning of his job at Intel and his Ph.D. program he told us he had no idea or knowledge on the projects that he was working on. Someone asked him how he was able to become so successful in a field when he didn’t know anything. His answer was mind-blowing. He said that there is one advantage to having no knowledge in the field—you don’t know what is impossible. It was the first positive perspective that I had of myself.  I realized I have experiences that others might not have that could possibly bring new ideas to the table.

Research isn’t always analyzing data and collecting samples. It also includes bringing ideas outside of the box and applying it to the research project and making a difference. To do so, not only do you need to have the knowledge but also an open mindset. I may not be the most knowledgeable, but I am openminded to any concepts that they throw at me because I am a blank sheet. The learning curve may be steeper and harder to get over, but that just means that I learned more.  As long as you have the desire and the motivation, one day that mountain you have to climb may not seem so steep.

Diane is a student from California State University, Long Beach. She is currently majoring in biomedical and electrical engineering and spent the summer participating in the AIM Photonics program, working in Dr. Bowers’ Optoelectronic Research lab.