The Irony of the Moth Eye

As promised in my previous post, this time I will actually delve into the nitty gritty of my research.

These days, many scientists are learning about complex topics in science by studying biological features of organisms we find in nature. For example, my research group has studied tiny microscopic surface structures found on the eye of a moth to learn more about light-matter interactions.

Indeed, this creepy little guy has a lot to teach us; and you could say it’s all in the eyes. It turns out that surfaces with these little bumps, which I will hereby just call motheyes, cause surfaces to transmit lots of light and reflect very little of it. That’s why moths have them in the first place: they can see better at night, and they won’t reflect glint back that predators could see. The Gordon group has developed a surface modification protocol, based on colloidal lithography and plasma etching, to create synthetic motheyes on inorganic substrates such as silicon. We can thus produce very useful, highly transmissive optics.

My research poses a different view on transmittance. Instead of shining light through a surface, let’s instead consider when light is emitted from within the surface in the form of thermal (blackbody) radiation. This is the radiation of light given off by any object above 0K; hotter objects, like red-hot iron, give off lots of visible light. Cooler objects, like human bodies, give off weaker infrared radiation, as does a silicon wafer at, say, 250ºC. Because of the same properties that lend motheyes high transmissivity, it stands to reason that adding motheye structures to silicon surfaces would allow more thermal radiation to “escape” from the surface of the object. What I aim to answer in my project is exactly how much of a difference in radiation we see, and if we observe preferential emission at certain wavelengths – a phenomena we observe with transmission. To determine these things, we make measurements on how much IR light is given off by structured and unstructured surfaces and compare what happens at different wavelengths.

I made a device that heats up and aligns our sample with our instrument, a Fourier transform infrared spectroscope (FTIR), without picking of the thermal signatures from the heater surrounding the sample or the maximum radiation reference (a jet black cone of graphite that emits close to the most an object theoretically can). Here’s a picture of the final setup: 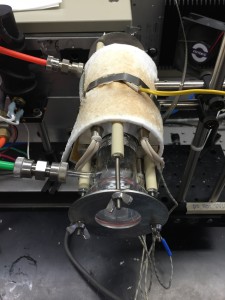 We measure the spectrum of light coming off of our samples using the infrared spectroscope above on the right, and through what I will hand-wavingly call the “magic of optics and math,” we get a graph that looks like this: 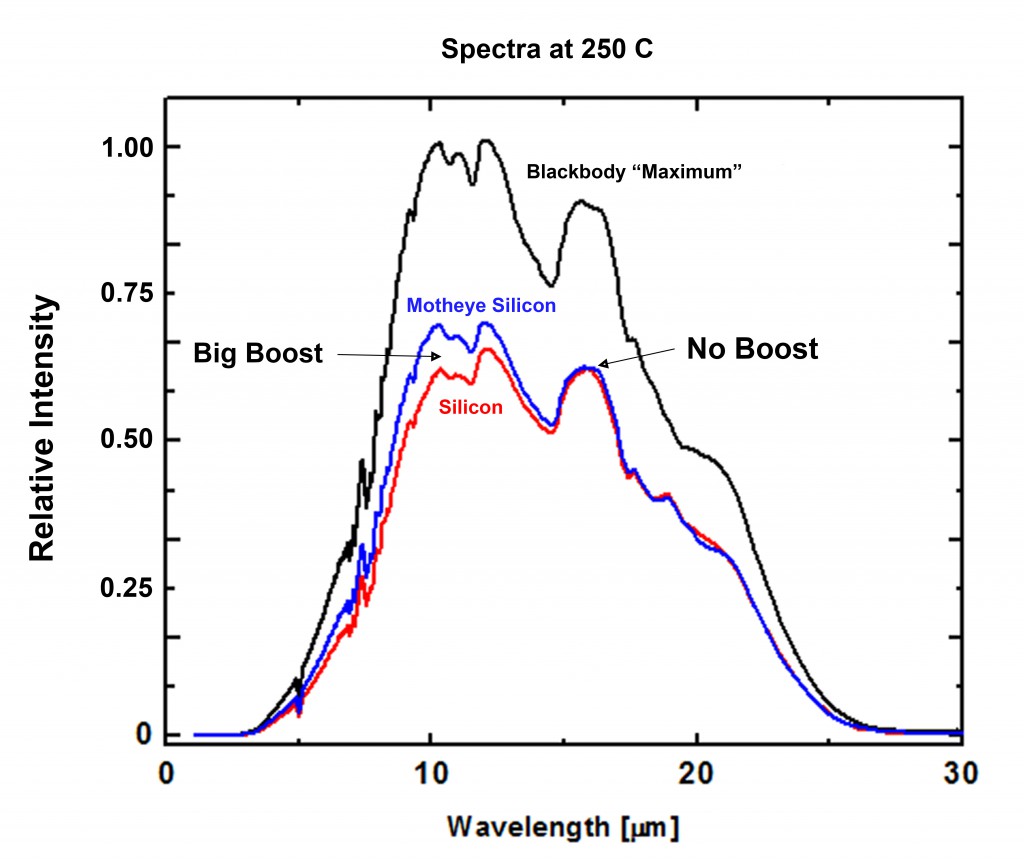 This is a distribution of the intensity of light given off by each sample at different wavelengths. We can use this to characterize the emissive behaviors of different motheye surfaces. This structure, for example, boosts emission of light from about 5um to 15um, but then emits the same amount of light as unstructured silicon.

The ability to not only boost thermal emissions, but boost them selectively with respect to wavelength has some pretty neat implications. Besides a deeper understanding of how light and matter interact, this process can be used in passive radiative cooling, imaging technologies, and – maybe the biggest sell – efficient lighting. And with that said, the irony : technology that will brighten our lives… inspired by an insect that lives in the dark.

Hey there! John Stair here. I’m a research intern in the Early Undergraduate Research and Knowledge Acquisition (EUREKA!) program. This summer I’m working with the Gordon Group in the Department of Chemical Engineering at UCSB on understanding how surfaces radiate thermal energy. In this post I’m going to focus less on what I’m researching and more on who I’m researching with.

I was expecting this research experience to be like another internship I participated in. I spent an entire summer working in a room full of people that I never heard a word out of; my current research group could not be more different. The graduate and undergraduate students in my lab, like siblings, poke fun at each other and joke around. My professor guides them like a father, not withholding a few well-timed dad jokes. When we break one of our toys (err, instruments?), he pops into his machine shop and rigs up a fix. He is responsible for our growing as researchers as our individual parents were responsible for our growing as people. Everyone in our lab works, eats, laughs, and learns as a family unit… and they’ve already included me. Everyone depends on each other’s experience and knowledge to make progress in their work. Because they all depend on each other, expectations are high, but they’ll go the mile to help. Being welcomed into such an interesting and passionate group has made a great impression on me about academia and research.

When I first came to UCSB there was a huge push to drill the fact that we were a dedicated “research university,” but I thought that there were just hyping themselves up like most colleges do. But what I’ve discovered – and I think this holds for many of our professors here at UCSB – was that my mentor didn’t just want labor out of me. He actively tries to keep me interested and engaged, even when it’s a slow time around the lab. I’ve noticed a real interest in making educated and passionate learners and investigators out of undergraduates, a facet of UCSB life that may be hard to find elsewhere.

If you were looking for specifics on my project, my next post may be what you’re looking for. Yes Dr. Gordon, I’ll even throw in some data for you.

Until next time,
John