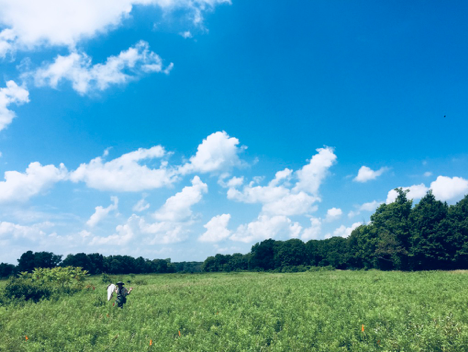 On the Pursuit of Science

After seven weeks undertaking a crash course in field biology last spring, I was convinced I wouldn’t be a particularly good scientist. My problem, I told myself, was passion, though this is perhaps a bit of a misleading statement. As our nomadic band of student researchers meandered up and down the coast of California, sleeping under oaks that had stood tall before the first Europeans set foot on the continent and wading through rivers gasping with fresh spring breath, I found myself completely entranced by an astronomically improbable, impossibly beautiful world. I quickly developed a reputation as the head-in-the-clouds idealist of the group, and could be found sketching out plans for a treehouse or writing poetry in the field I was supposed to be surveying for canopy cover. I thought I was a lousy scientist because for the first time in my life I felt a spiritual connection to nature and the people I was experiencing it with, and I believed that not only did this connection supersede the cool, calculated work of science, the two views were mutually exclusive.

My experience conducting research last summer changed my view of what science could be, and of what it could mean to somebody. I took a position as a research assistant on a behavioral ecology project out in rural northwest Pennsylvania. We were examining communities of praying mantises in old field ecosystems, and we wanted to know whether behaviorally diverse mantis communities– that is, communities with some mantises that are “bolder,” and some that are “shyer”— would occupy a different niche than a behavioral monoculture. Would these communities feed on different prey, live in a different physical space, and ultimately have a hand in shaping the overall ecosystem? It’s a fascinating research question, but as I drove east I was unsure of whether I would run into the same problem I had during the spring. I worried I lacked the mental discipline required to do good science.

By my city boy standards the research site was remote: a few miles from one of Pennsylvania’s “scenic byways” lined with fields of hay and copses of impossibly green foliage, an occasional community of ranch houses was the only break from the bucolic landscape. I quickly realized my environment for the next several months would be completely different from anything I had experienced growing up in California. Linesville, the closest town to our research site, offered little in the way of entertainment, so our small research team quickly grew close as we spent virtually every waking minute together. About a week into the field season, we started playing a game in the evenings to pass the time where one person would try and draw someone else without looking down at the paper. The results were often as comical as they were disturbing, and we decided to start hanging them up on a wall in our cabin, with the best portraits occupying the upper right corner. As the season passed, the wall began to resemble an evidence board from a made-for-TV crime drama, complete with crisscrossing red string that connected each person’s body of work. 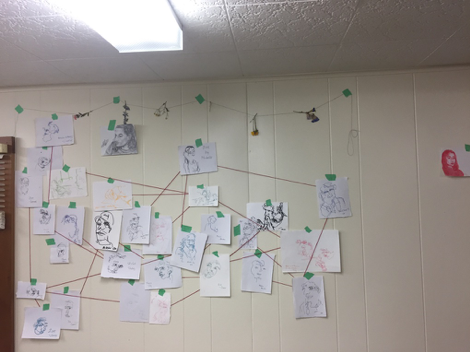 The wall, midway through its development.

I was surprised by how quickly I came to regard the other research assistants as close friends, although it makes sense given the context. Ecological fieldwork is self-selecting, in that it attracts people who don’t mind sweat, dirt, travel to unfamiliar places, and oftentimes a lack of connection to the outside world. These people are adventurers: they love the thrill of discovery, large or small, and seek out novelty both at home and abroad. In other words, fieldwork self-selects for scientists; in my time in Pennsylvania I revised my definition of what that meant. If someone had told me before that trip that my time researching wouldn’t be spent poring over data, conducting heady calculations, or examining specimens in lab, I would have been incredulous. However, I spent much of my time that summer out in the sun, collecting mantises for assay (read: frolicking in a field), applying a sticky substance called tanglefoot to prevent the occupants of our experimental plots from escaping (painting), and constructing an apparatus to test mantis perch height (doing arts and crafts). Not to mention the actual poetry and art the other research assistants and I spent a lot of time creating and sharing with each other throughout the summer.

My experience made me realize emotional immersion in the system one is studying is an asset, not a detriment, to research. I loved the sound the wind made as it flowed through the field of goldenrod every afternoon and thus didn’t mind checking the plots an extra time to ensure that everything was set up correctly. A fellow research assistant’s fascination with arthropods meant we could identify insects to family onsite and get a jumpstart on the data analysis. And the picture of four kids armed with sweepnets and rubber boots laughing as they sauntered down a lonely stretch of country road caught the attention of more than one interested local and indirectly gave our research more recognition, not to mention connecting two of the most disparate demographic groups in America through the miracle of mutual curiosity. Science, and especially ecology, will never be entirely clinical, and that’s a good thing: who would want to live cut off from their playful, passionate, quixotic, human self?

I’m grateful to have had the opportunity to revise my definition of science. Science, I now believe, is a method, a way of asking and answering questions that matter. But the act of science is much more than that. It is a pursuit, an endless chase. It is a shared ordeal that brings people closer than they imagined they could get. It is the childlike wonder you feel when you’re faced with your own insignificance; it is an adventure to unknown lands. When you’re done, when the numbers are crunched and you have your results, you see your same surroundings with new eyes. It cannot be commodified; it is priceless.