A Surprising Pollutant Discovery During my Trip to Panamá

For many middle and upper-class Americans, going to another country is a vacation. People traveling out of a comparably wealthy place often expect blue skies, crystal clear waters, and cocktails served to them at a poolside bar. However, for lower class travelers and students trying to explore the world, this picturesque scene is often not in the budget. Luckily, this can very often make for a more realistic and wholesome experience when exploring a new place. I think that this may be because it indirectly helps young travelers avoid taking their “bubble” with them when they get off the plane.

Over summer break, my friends and I found ourselves traveling Central America on a tight budget in an effort to gain new experiences and collect ourselves before our senior years at UCSB. We expected to see the bright blue, lionfish filled waters at every beach once we arrived via speedboat at our popular tourist destination: Bocas Del Toro, Panamá. After the thunderstorms cleared, we were in search for a beach close to the main town, and we stumbled upon Istmito Beach. Istmito was nudged at the crossroads of the local cemetery and a low income neighborhood. At first sight, we saw Panamanian kids playing soccer downstream of a small pier, on which european travelers from the hostel around the corner were sitting and sunbathing. However, when we looked closely at the tides of this beach, strangely enough we saw thousands of tiny balls washing within the black waves. We initially thought that what we were seeing were pebbles.

My research here at UCSB in Michelle O’Malley’s lab has always encouraged me to ask more questions and to be curious about things that seem out of the ordinary. This curiosity seemed to follow me outside of the lab in this case.

After visiting this beach and coming back to UCSB, I took a look at a few of these balls and discovered that what we saw and what the kids swam in appeared to be some synthetic fiber. The resources and encouragement provided by my graduate student mentor allowed me to inspect the sample via microscope. After taking a look, it seemed that the balls were composed of cotton or another type of fiber. This fiber originates from humans, rather than my original hypothesis which was that the balls were composed of algae. 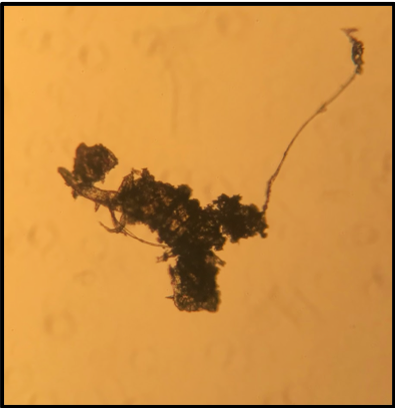 This is a less salient manner of pollution compared to what we see on the news: heaping piles of trash in the middle of the ocean and straws inside of sea turtle’s noses. However, seeing this type of pollution at a local beach raises the point that in less developed parts of the world there are all manner of pollution caused by human presence. In this case and possibly many others, we found this pollution within 2 square miles of crystal clear beaches that are often the foci of Instagram posts about paradise. Unfortunately, this pollution often accumulates and affects the beaches next to the homes of people running stores and hostels, since the town is much less concerned with losing money from tourism in these locations.

At the end of this eye-opening trip to Panamá, I came to understand that being an undergraduate researcher at UCSB has instilled curiosity into my continually developing world view. The fact that the world is saturated with questions is exactly the reason why training to become a scientist is a satisfying and endless endeavor.